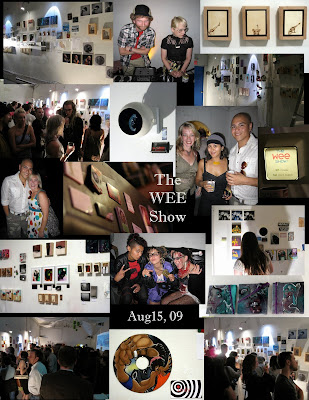 Here's a video of the event! 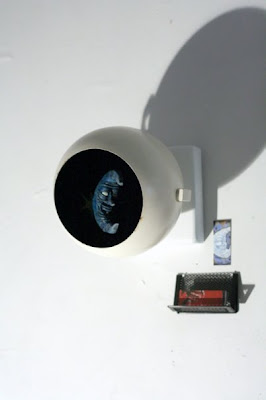 This is what i submitted. It's called "Man In A Globe" and it's an 8x8 retro light fixture painted with glow-in-the-dark stars(you can't see them in this pic) and mounted on wood, with a super sculpee sculpture of one of my Man in Moon characters inside, painted with acrylic and glow-in-the-dark paint! Fyew... 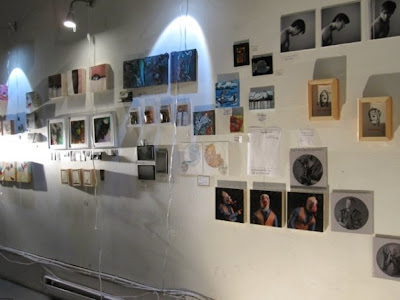 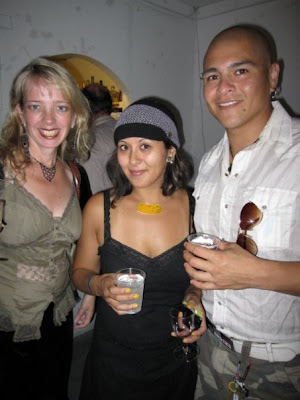 Tonje of Belly Belly Hip, Me and Indy 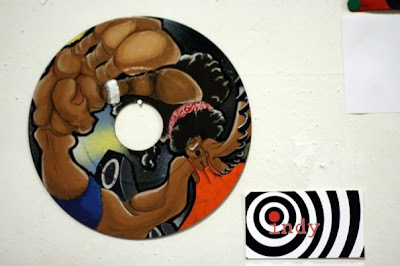 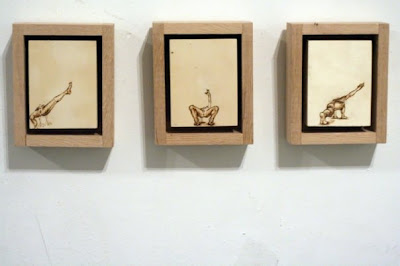 "Yogagina" series by Shary Contrary
Wood burning on wood(she uses the knots in the wood for the vaginas)
Posted by jenn brisson at 4:34 PM No comments: 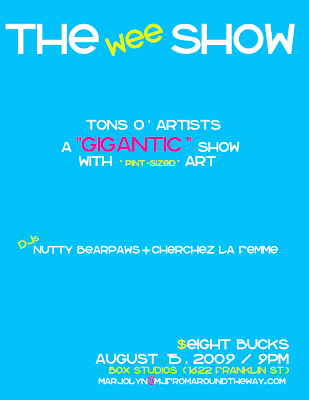 The WEE Show - a GIGANTIC art show with TINY art!! Over 50 artists! You should see the list! Seriously!! Click here for more info! And for the Facebook event page, click here. I'll post my entry soon. As always, i'm still working on it... i know, i know... the show is tomorrow... but this piece is going to be completely different than anything i've done before... i'm so excited!!
Posted by jenn brisson at 11:14 AM No comments:

First shown at Groove Operator's CD Release Party, i just sent these three bad boys(ok, 2 bad boys and one bad girl) to Edmonton. I was commissioned to do these famous icons in teddymare form for a 50's style apartment. Can you guess who they are supposed to be? 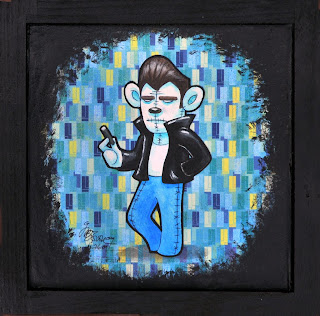 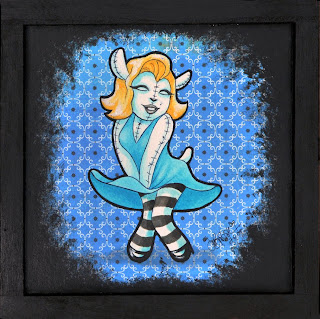 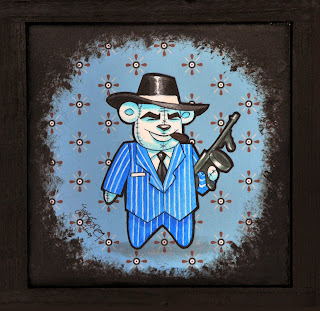 Here are a couple of paintings i did for a friend of her kids just a few months ago. I'm in the process of doing more kid portraits. If you are interested please email me! 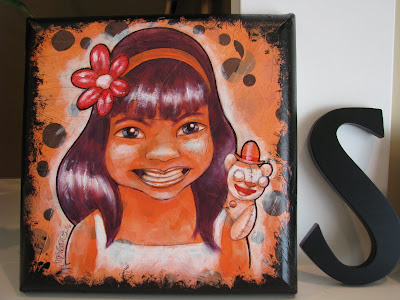 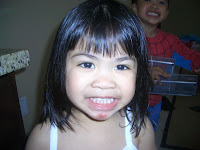 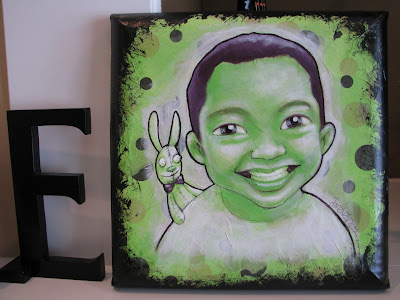 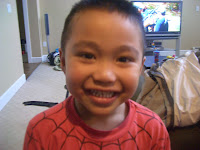 "Elijah" 12x12 Acrylic and mixed on canvas
Posted by jenn brisson at 2:16 PM No comments: 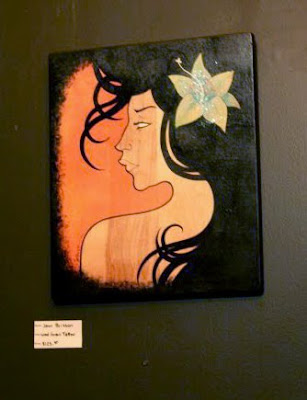 These paintings were done for Mother's Day 2009 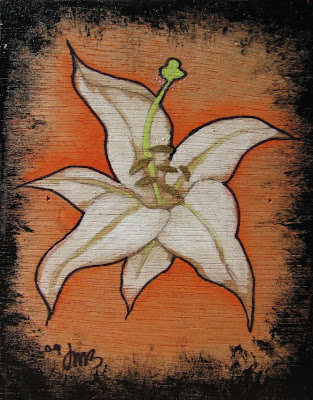 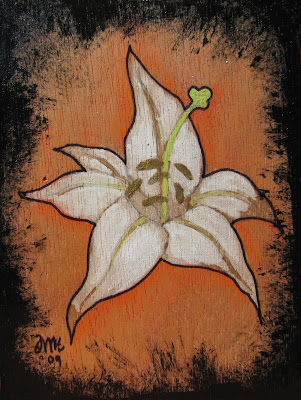 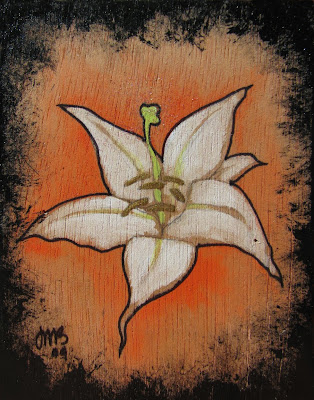 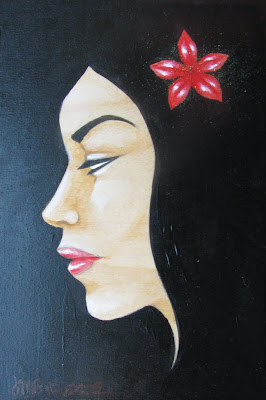 This one was for Arlyn on her birthday June 2009
Posted by jenn brisson at 12:00 PM No comments: 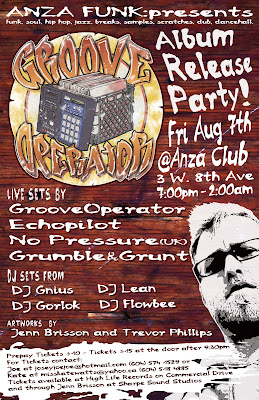 A co-worker and good friend of mine, Josey Watts(Groove Operator) is releasing his first album, "Motion Control"! I am already one of his biggest fans!! This shit is tha BOMB!!!! Seriously, i love it! Eventhough i am playing on the 5th track called "Moments" bustin out some flute licks... or what others might call a... tin whistle, i am not being biased!! It's pretty funkin' sweet!

Some other friends of mine will also be performing that night, such as Mike Paprocki(Echopilot).

I am proud to be a part of the festivities, as well... i will be showing some art, as well as selling some prints and magnets. PLUS Joe will be reuniting with members of an old funk band he was in while living in England... and i've been asked to do a little sumptin sumptin on the mic... well, we'll see...

This is the album!!! "Motion Control" 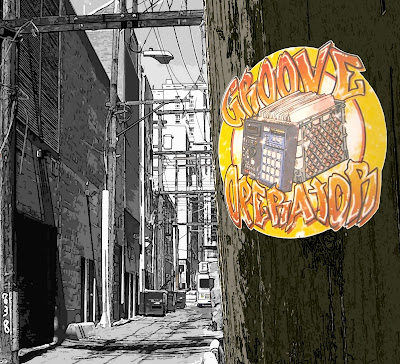 Leaving you with words about the show from the GrooveOperator himself...

Just to let you know that the gig at the Anza Club is in ONE DAY and would love to see you out that night in force to support my efforts to eliminate wack hip hop from the air waves. GrooveOperator's first album "Motion Control" is the first in a series of audio strikes against non funky beat makers, wack mcs, ring tone puppets, studio gangsters, emo kids, and folk that don't got no soul. To propogate this audio revolution to your friends and family would be of great service to the cause and will be a contributing factor in bringing balance to the force. Please organize your tickets with either Joe or Jenn this week as tickets being sold at an exponential rate. GrooveOperator's military wing has already started recruiting foot soldiers and counter revolutionaries to overthrow the established order to bring funk and soul to those who have been purged and exposed to the wackness for so many years.

God Bless You All

Together we can get through this"

-Joseyjoe aka GrooveOperator
Posted by jenn brisson at 3:55 PM No comments: