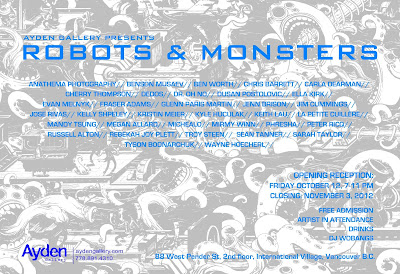 Ayden Gallery had their annual
Robots and Monsters Show Oct 12-Nov 3.
Even though i had a handful of months to prepare,
i still waited till that familiar hint of panic to creep in before i took any action...
I managed to do 3 new paintings (one taking WAY longer than i'd hoped) and was pretty impressed with the results. At first, there were moments of REALLY not liking what i was doing and not happy with how this one painting was shaping out to be... i just had to tell myself that i often go through this and that i should keep going and push through. I knew that at some point the painting would start looking like how i wanted and that i'd be happy with the outcome...

After a lot of heart poured into it, "Lucy" ended up being my favourite piece up to date...
All it took was a bit of time, effort, patience, and faith in my abilities...

Below are the 3 new pieces i did for the show... 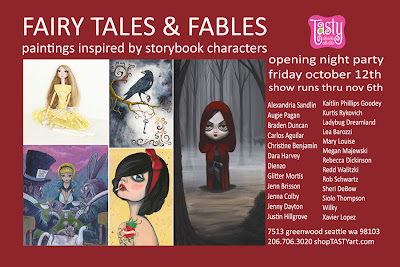 Another TASTY Show with a tasty theme!
Right away, my mind went to one of my fave fairy tales, but decided to portray this character diffirent by showing he fearless side. Here i painted Red, The Hooded Warrior and behind her... is that her friend backing her up? A ghost of a fallen wolf? Or is it her Spirit Animal and she IS the wolf?
I'll leave that up to you to decide. 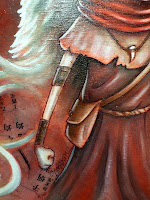 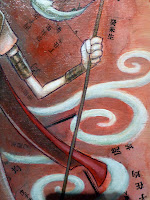 Posted by jenn brisson at 4:05 PM No comments: 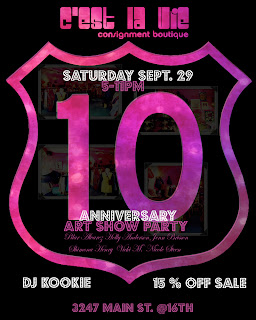 Cute lil' art show and boutique sale. Although it was NOT my plan... i did go home with 2 new shorts, a top and a wicked vintage green leather jacket... yup.

For this show i submitted 5 pieces... all framed in white. The two "Pretty Girls", "Easterly" and "Westwardly" and "Lucy In The Wind With Feathers". 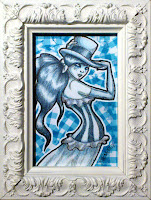 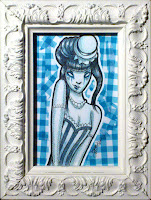 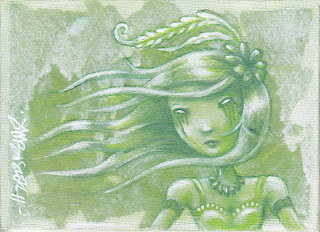 Posted by jenn brisson at 3:54 PM No comments: 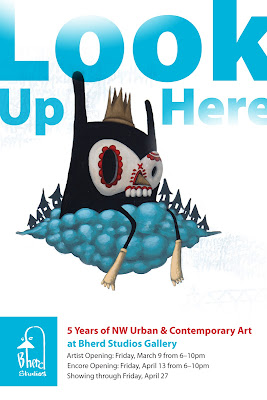 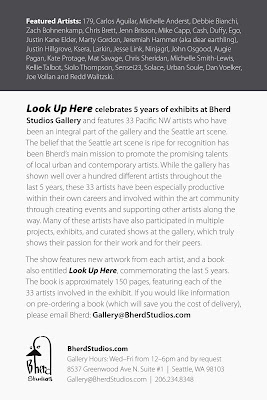 Bherd Gallery had their 5th Year Anniversary in March and with that released an art book compiled of 33 Pacific Northwest artists that have shown their work in the gallery or contributed to it in some way or form. I am very honored to be a part of this book and to share the pages with so many great artists! The book is really f-in cool!! So stoked about it! You can buy the book online! Enjoy!

PS. I'll post my pages eventually... but really, just buy the book... you won't be disappointed!
Posted by jenn brisson at 3:45 PM No comments: 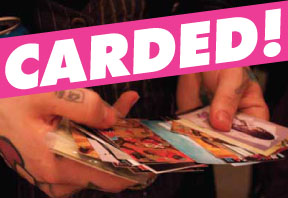 Once again CARDED happened! :) The show was on April 21st at Gallery Gachet. This time my submission was a collab piece i did with indy! It's the piece we did for the Sadie Hawkins Show that happened in Feb/March 2012.

To see more of the cards from the show click here. 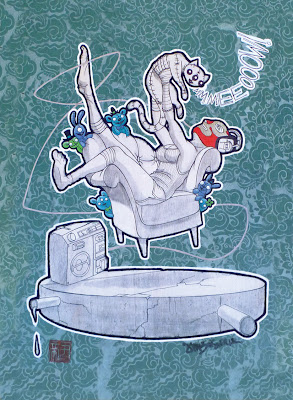 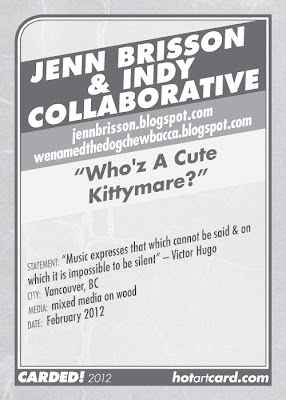 Posted by jenn brisson at 3:23 PM No comments: 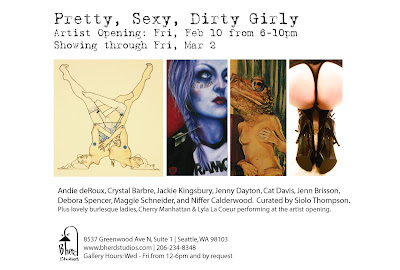 So, i had paintings in 2 shows last weekend in Seattle! One was called "Pretty, Sexy, Dirty, Girly" the other was "Sadie Hawkins Show". The first was held at the lovely Bherd Gallery where i've had the pleasure of showing work there in the past and the other was at Home Suite Home, just across the hall from Bherd :) The media went crazy over the weekend and both shows got a lot of attention.

"P, S, D, G Show" was about feminine sexuality and my paintings, along with a few other artists',  seemed to have balanced out the harsh, dark, and sometimes abrasive pieces that were up. Over all, i hear the show was a success(even had a beer sponsor this time around) and Siolo Thompson, who curated it and even was one of the artist in the show, got the media very interested in it!

Here are some press the show got!


I submitted 5 pieces all together. Here they are below(you might've seen some of them before)

Posted by jenn brisson at 2:49 PM No comments:

Sorry to be recapping everything i've done in the past few months(or more)... But i just realized that i haven't updated this blog in awhile. And with the 16th Eastside Culture Crawl happening THIS weekend, i figured i better do so... 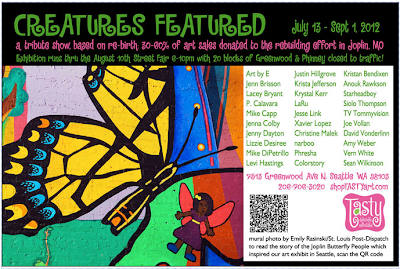 Creatures Featured was a great tribute show that happened at Tasty in Seattle in July! A part of the proceeds went to the residents of Joplin, MO to help rebuild their town. There is a great story about "The Joplin Butterfly People" that some of the residents saw during the hurricane and this show was inspired by that. Here's a link to that story...


Here are my 2 pieces i submitted for this show... Both framed in white. 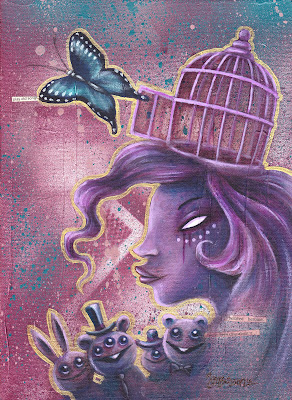 "Let It Go"
mixed on canvas 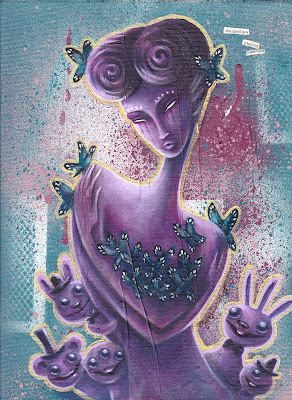 "Who's Comforting Who"
mixed on canvas

Posted by jenn brisson at 2:06 PM No comments:

FInally, i've completed my very first newsletter! Anyone wishing to subsribe to this, please follow the link below and be the first to be updated about shows coming up and new works!


Posted by jenn brisson at 1:04 PM No comments:

My buddies at Ride For Earth are still going at it! Their love for riding and our planet is getting the UK more trees and it's great to know that my art is helping out! My board is still selling in Germany and beyond and it's so great to know that i've become a part of a team that is passionate about having fun and caring for our planet at the same time...

Check out the new section on their site. You can buy my boards straight from them now. Bamboo Sk8, where they're built, also has a shop. Either way, proceeds goes to helping RFE plant trees in the UK, and hopefully soon in other parts of the word too!
Posted by jenn brisson at 1:37 PM No comments:

One of my fave artists at work! Love this stuff! So inspirational! I wanna paint big again!


Time lapse painting of 'Safety of Water' by Tara McPherson from Cotton Candy Machine on Vimeo.

Posted by jenn brisson at 5:43 PM No comments: 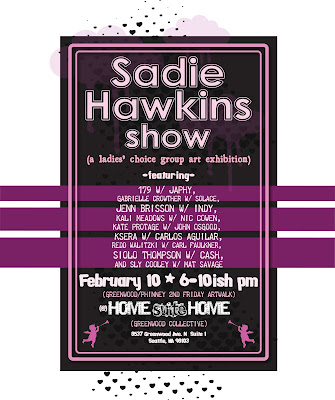 I was invited to participate in another Seattle group show called 'Sadie Hawkins Show'. Sadie Hawkins is a tradition that started in the late 30's and is based on the Al Capp comic strip, "Li'l Abner." As the tradition goes, usual roles are reversed and gals ask the guys to the dance. So in this case, ladies were required to ask a man of her choice to collaborate in a piece for the show!  My choice? I picked my Baby of course, indy!

Indy did up a ruff of what he had in mind, and we went back and forth tweaking the idea... i added my typical ripped up paper background and added my little teddymares and such. Overall is went well(didn't butt our heads too much), and the final piece was well-received! I loved how it turned out that i look forward to doing another piece with indy again!

Posted by jenn brisson at 11:44 AM No comments:

I sold this painting before i was able to take a picture of it. The owner of the piece was kind enough to take one for me and send it over. Thanks Simon!
Posted by jenn brisson at 3:57 PM No comments:

So, i guess i've been in this flighty, windy stage or something,
cuz a lot of my work these days have wind-blown hair and seem to be waiting for something.

Perhaps i'm in a transitional stage and letting the wind sorta guide me towards the right direction...

...Curious as to what will wait for me on the other end...


Posted by jenn brisson at 3:19 PM No comments:

Lucy In The Wind With Feathers 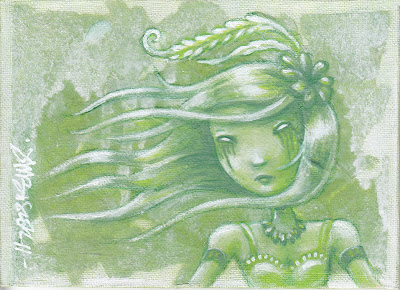 "Lucy In The Wind With Feathers"
7x9 in thick white frame
mixed on canvas board
Posted by jenn brisson at 3:01 PM No comments: 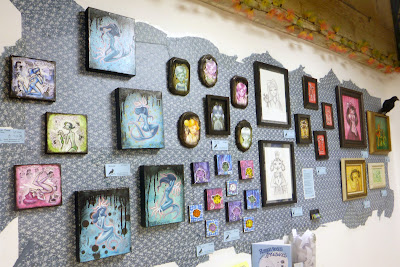 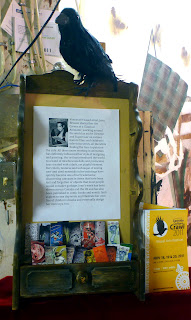 So, just to recap(sorry it's like, 3 months later!!)... it was quite successful. Did i ever mention that? Anyways, it was. Busy as per usual- tons of new people coming through, lots of sales(prints, magnets and paintings), a lot of new "fans"... like i said it was successful. I did something fancy with one of the walls that i had my art displayed on(got a lot of great feedback from that)and now i'm trying to figure out how i'll show my work for next year... one thing i know i HAVE to do for next year, is start preparing WAY earlier! I know i say that every year, but i still fall behind and then it's a panic to get everything organized! I guess that's the way i work... ah well. 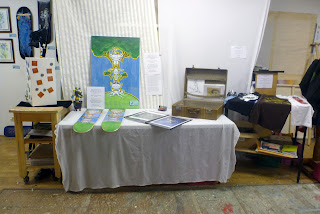 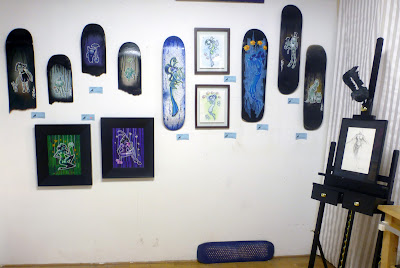 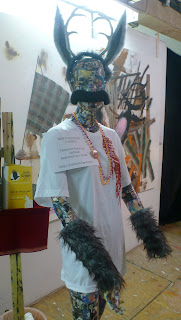 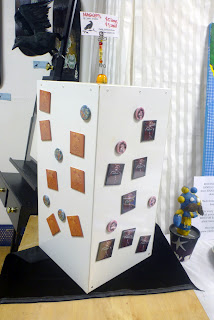 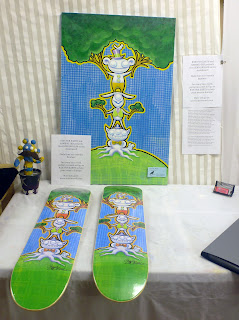 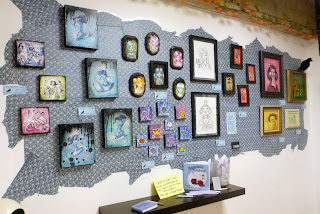 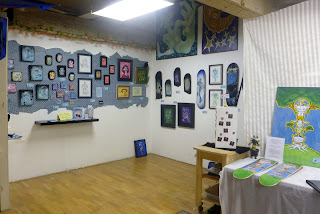 Posted by jenn brisson at 12:31 PM No comments:

My Hot One Inch Action Buttons!

Here's the art i submitted... 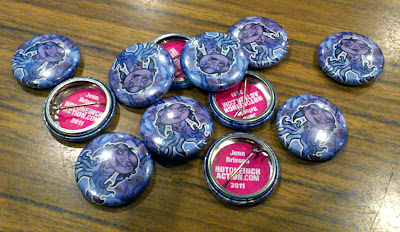 And here are the buttons!! I got 20 to start! For more info click here!
A lot of the artists that have been involved in this show have been interviewed! The videos have been posted on their site too... If you haven't yet, check out mine!
Posted by jenn brisson at 2:47 PM 2 comments: