I was interviewed at the Toy Show this Dec... and here is the final video!!
Can you spot my paintings?

Here are a couple of new pieces that will be shown at my next solo show on Feb 7th (for more info see entry below). I've started my marionette/burlesque thang... MARIONESQUE! 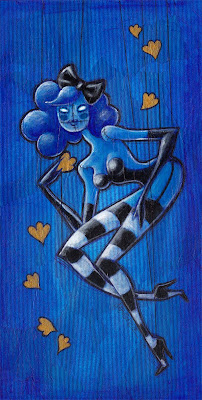 "Antoinette"
mixed on canvas board
Jan 2010 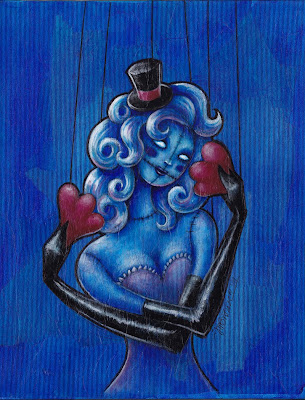 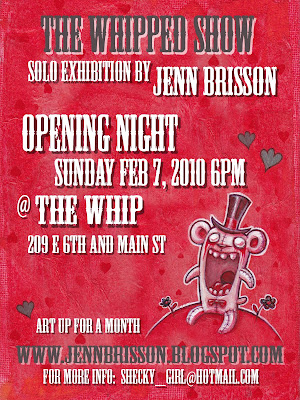 Come out to my next Solo Show at The Whip!! I have some new work to show you. Plus I have a few new prints for sale and there will be V-DAY CARDS!

Sunday is CAESAR specials, and it's also their Cask night – starts at 4 and goes until it runs out – they're always busy for this.

PLEASE stop by and say hello!! I know it says until 10pm, but i'll probably be there past that, just in case you wanted to come by later. The art will be up till the beginning of March, so if you can't make it that night, swing by another time.

If you're not already a fan go to my Page!
You can RSVP for the event here.
Posted by jenn brisson at 4:35 PM No comments:

Submissions for The "Heart-On" Show 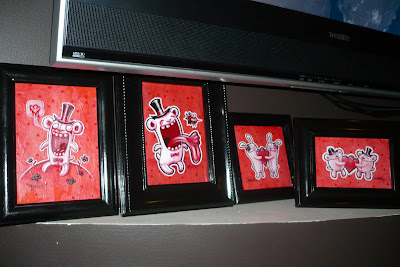 Here are a few paintings i just finished. I'm being asked to turn these into V-Day Cards...
they're pretty cute, so i just might... 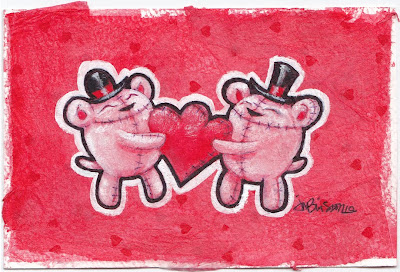 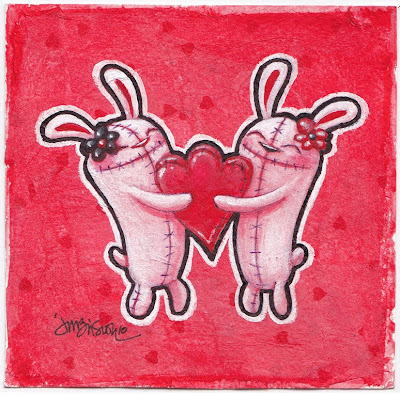 "Bunny Luv"
Jan 2010
mixed on watercolour paper
Plus here is a new character. His name is Mouthie Bear! 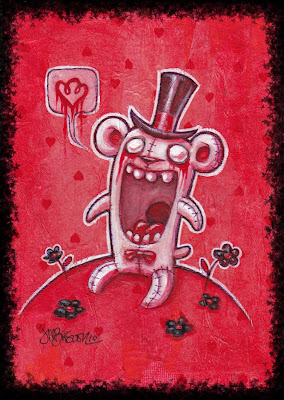 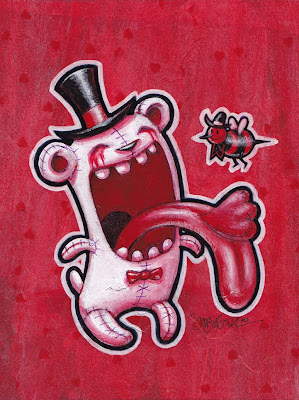 So, i have a few shows coming up just in time for Valentine's Day and the Olympics. It's gonna be a busy month!
1. One of them is a group show called The "Heart-On" Show. It's happenin' Sat Feb 6th at Box Studios! RSVP on Facebook or here 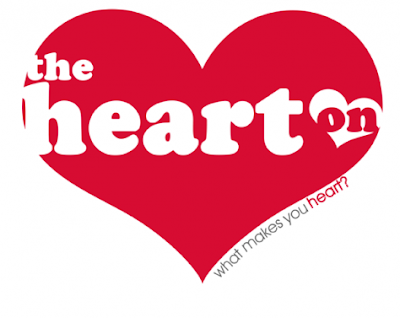 2. Then right after on the Sun Feb 7th I'm having a Solo Show at The Whip from 6-9pm!! Sunday is Caesar specials, and it is also their Cask night – starts at 4 and goes until it runs out – they're always busy for this. Please please PLEASE come out and say hello!! I'll have some new stuff to show!! Plus i have a few new prints!
3. The "Carded" Show will be on Feb 27th at Gallery Row on Granville and Broadway. Announcements haven't been made yet about who's in the show, but 50 lucky artists will be chosen to have their art on trading cards with their info for a 'one-night-only-trading-card-night'. I was in their last show and it was so much! It's on Facebook, too.

4. One more group show to work out, then i'll send an update about that, as well. "Murder of Crows" is going to make a come-back! Unfortunately the venue we had slated for Feb backed out at the last minute so we are scrambling to find another location for our show! Any ideas??

Hope everyone is having a great New Years so far! See you soon!!
Posted by jenn brisson at 1:27 PM No comments:

I just recently sent out a commission i did for someone who works at a radio station in Edmonton called The Bounce. This would be his 5th purchase from me! WOW I have a fan!!

Anyways, the painting was pretty challenging as it was BIG, for one(it's been awhile since i did anything that big!), two, it was supposed to have one of my moon men in it along with a tree and three, i decided i wanted to use ripped tissue to cover the background(which meant i had to tediously place and stick tiny pieces of tissue between all the branches of the tree, and still make it look like it was getting lighter as it got closer to the moon) FYEW!

It needed to be dark, blue and landscape(instead of portrait). I had tons of different ruffs to figure out how i was going to do it, but it wasn't until i saw the movie, "I Sell The Dead" starring Ron Perlman and saw one scene with a tree on the left and moon in the distance, that i immediately found inspiration... You'd think that it would be pretty easy to place a tree and a moon in a painting together, but lemme tell ya... i was having a hard time!

Anyways, here is as idea of what it looked like! The only one like it... "Moon and Tree" 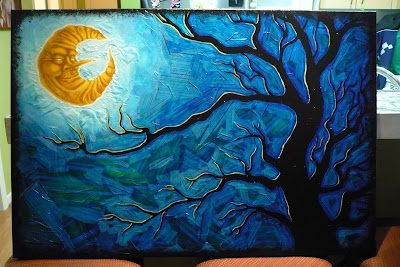 Posted by jenn brisson at 4:34 PM No comments: 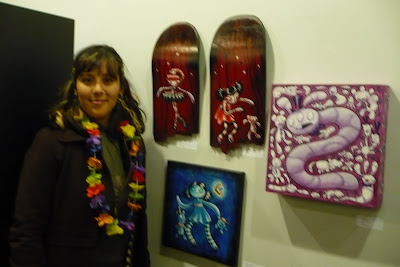 Me and my submissions... 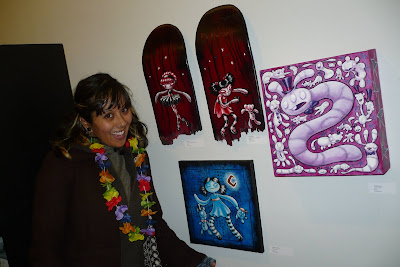 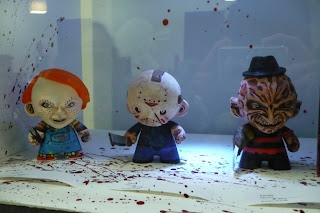 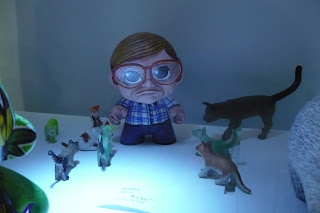 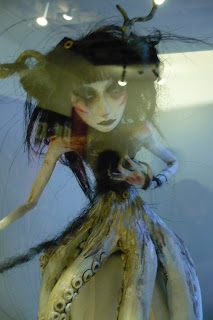 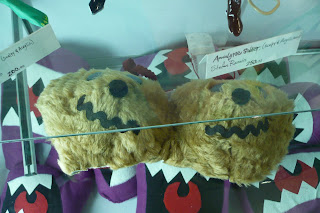 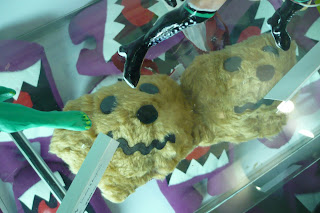 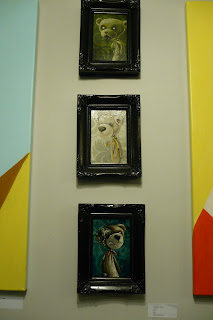 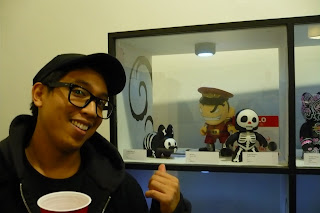 Albert Art with his submissions... 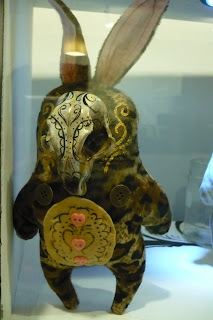 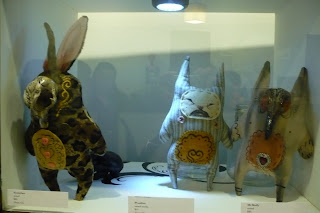 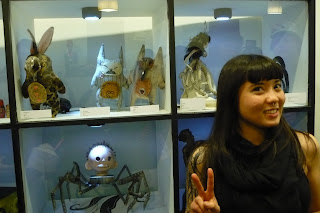 Nomi-Chi's stuff... which were my faves!! 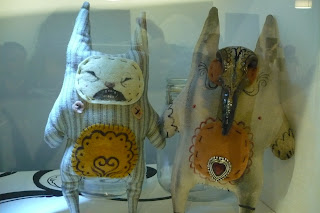 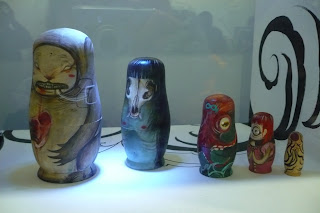 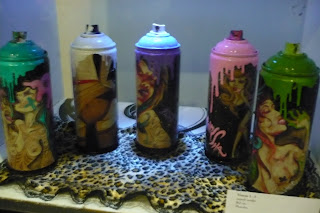 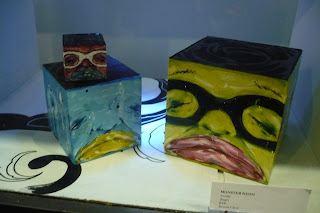 If you wanted to check out the paintings i submitted for the Toy Show on the The Fall Gallery and Tattooing website, click the link. There might be a video to go along with it at some point... i was interviewed at the event along with a bunch of other artists... but who knows if the video will get made or if i'll even be in it... anyways, the pics are fun. :D
Posted by jenn brisson at 4:27 PM No comments:

Click here for the link to the latest "Hot One Inch Action" Button Show i was in! You can check out all 50 buttons! Stay tuned for the next show Carded Part 2! I was in the first show and will be submitting for the next one as well... weeeee... busy beeeeeee...
Posted by jenn brisson at 4:10 PM No comments: